The Grundisburgh Smithy can now be seen at the Museum of East Anglian Life in Stowmarket. The blacksmith made and repaired household implements, machinery for the farm and parts for carts, as well as horseshoes. 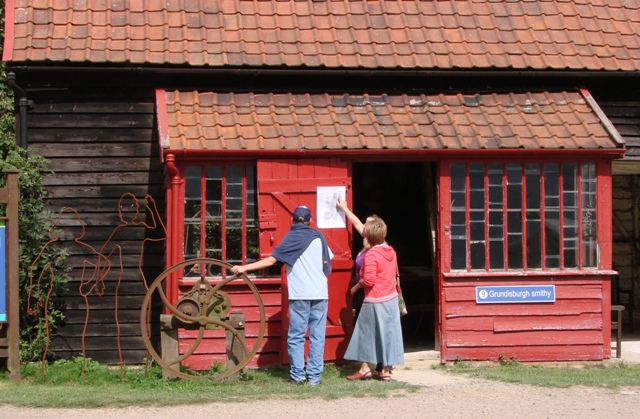 There were a few craftsmen that nearly every village needed, before these days of mass production and easy transport—The butcher, baker, blacksmith, carpenter, and miller. The crafts were usually undertaken from workshops in, or next to, their own homes.

The mills referred to in the Domesday Book (1086) are all water mills, including the water mill at Flatford, which was made famous by the artist, John Constable.

Villages would also have had at least one shop, and some ale-houses or an inn, where home brewed beer was sold. 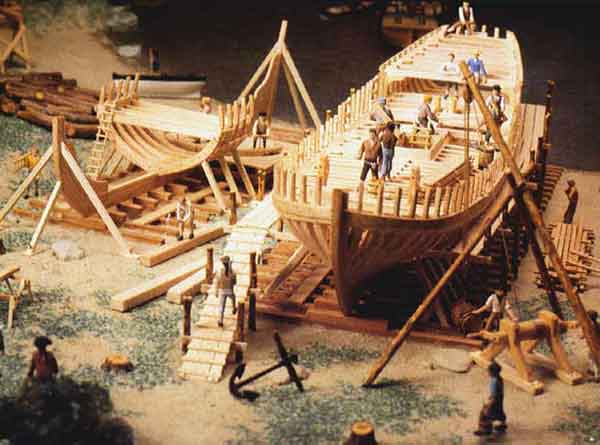 Some trades were related to the needs or products of a particular locality e.g. weavers, brick-makers and shipwrights. Other craftsmen were more likely to be found in larger villages and market towns—men such as the saddler, cooper, cobbler and tailor; women like the dressmaker. These people would also have had their workshops at home.

The textile trades of spinning, weaving, dying and fulling (cleansing the cloth) were particularly important in south Suffolk in the 15th and 16th centuries. The work was organised by merchants such as Thomas Spring of Lavenham. They produced or bought wool, which they then distributed to workers, who would spin it in their homes before it was collected and taken to the homes of those undertaking the subsequent stages in the process.

In Elizabeth I’s reign, competition from Dutch refugees—arriving mainly in Norfolk and Essex—caused a setback. The final blow came in the 19th century, when factories in the north of England were mass-producing yarn and cloth that was more attractive, and cheaper, than goods produced in the old way.

Replacement industries were needed and the ones that developed in Suffolk involved working with finer and also coarser fibres than wool. The new industries were:

As Suffolk is an agricultural—and mainly arable—county, companies have focused on serving the farmer’s need for fertilisers and pest control, as well as for machinery. The first fertilisers to be used—other than the dung of the farmer’s animals—were marl and coprolite. Coprolite was fossilised dung. In the 1840s it was discovered that, even fossilised, it was still capable of fertilizing the soil.

As there were bands of coprolite at the coast, between Felixstowe and Orford, it was quarried, crushed and spread until—50 years later—the seams ran out. Edward Packard of Snape converted a mill, and later opened a factory in Brantham to pursue this calling. In time, his company became another component of Fisons.

Having produced a good crop, the farmer needed to sell it—usually to a company, who would mill it, brew it, bake it, or otherwise turn it into a product ready to sell on to the ultimate customer. Nowadays sugar beet factories dominate several flat landscapes—notably the approach to Bury St Edmunds, on the A14.

Before the 20th century, windmills were the outstanding features of the landscape, along with the sloping roofs of oast houses, where hops were dried. Many of these old buildings have now been put to other uses. For example, the old oast house in Haughley, near Stowmarket, was used to house German prisoners at the end of World War II and is now the village hall.

Brewing has always been important in Suffolk. Recently, Greene King, based in Bury St Edmunds, has expanded to become a nationwide chain, while Ipswich’s Tolly Cobbold ceased production in 2002. Adnams, of Southwold, continue to enjoy a high reputation, and a number of small breweries have opened in the last few years, supported by CAMRA and numerous beer festivals.

There is still some livestock produced on Suffolk’s farms. More controversially with some, there are also numerous ‘factory farms’ that raise pigs and poultry in the county. 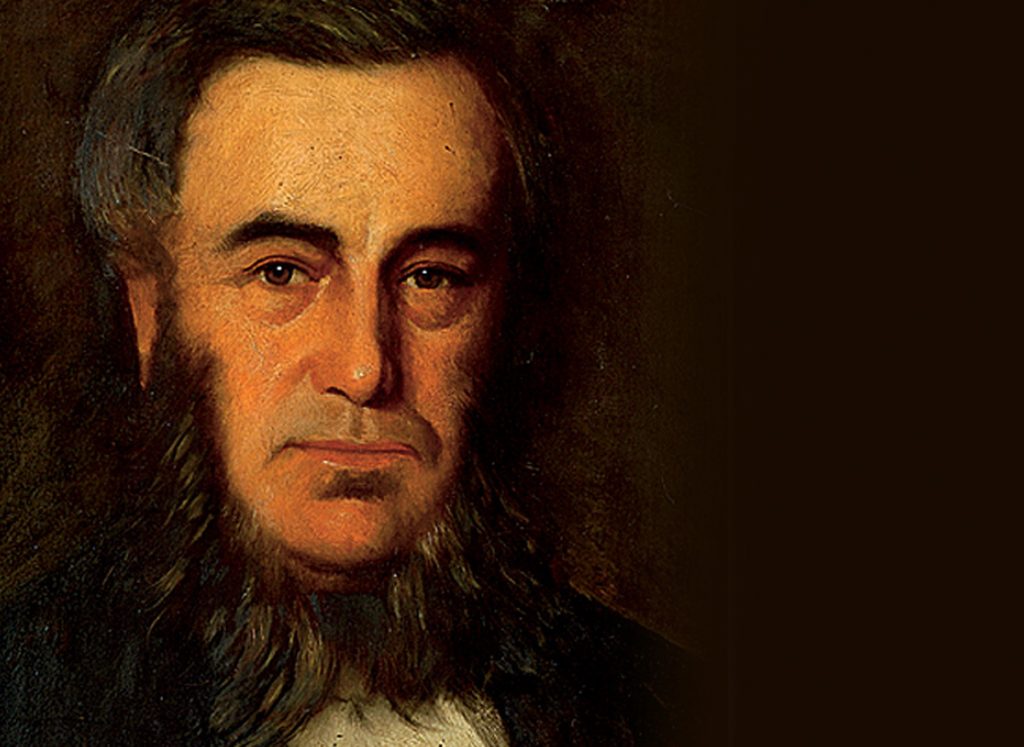 Suffolk’s entry to the industrial age is largely due to two families: the GARRETTS and the RANSOMES. In 1778, Richard Garrett—a blacksmith making farm implements such as sickles—moved from Woodbridge to Leiston. There he set up an agricultural engineering workshop which, under his grandson, Richard Garrett III, became the first in the whole country to use production line techniques. Garretts made a wide range of agricultural and domestic appliances, but they were most famous for their portable steam engines and their threshers. In 1851, Richard Garrett took his 300 workmen, and their wives, to London by sea to visit the Great Exhibition. It is thought that he got the idea of introducing a production line system from a conversation with Samuel Colt, the famous American gun manufacturer, whom he met at the exhibition. 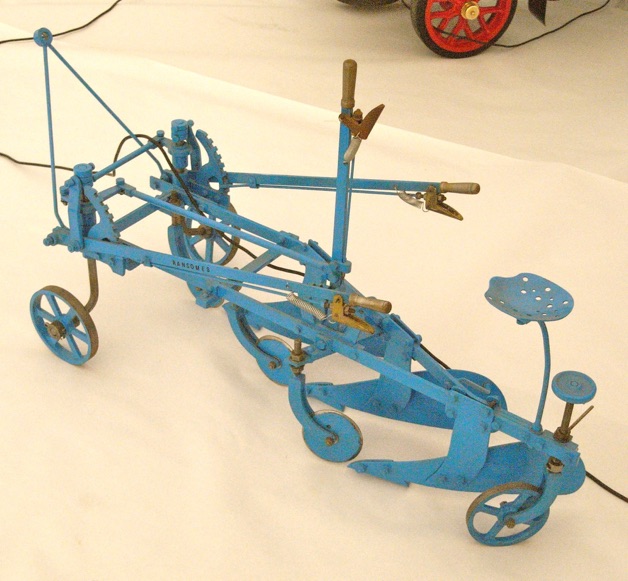 In 1789—just 11 years after Richard Garrett had set up in Leiston—Robert Ransome established an iron and brass foundry in Ipswich. He was a Quaker who moved into Suffolk from Norwich. In 1803, Ransome discovered a method of making a self-sharpening ploughshare. Ransome achieved his breakthrough by cooling the underside of the metal rapidly, thus producing ‘chilled’ iron. As a result, the lower surface was harder than the top one—it therefore wore down more slowly than the upper one did, and the blade was self-sharpening.

Another great advance made by Ransome, in 1808, was the introduction of standardised plough parts, which allowed ploughs to be repaired easily and put back in use by unit replacement. This was quicker and cheaper than having broken parts repaired or remade by a blacksmith.

Garretts and Ransomes both had their followers in the 19th century, and both experienced problems in the face of competition in later years. Each company diversified and underwent a series of take-overs.

Neither company’s plans proved as successful as they had hoped. Garretts closed its doors for the last time in 1980, but Ransomes still survives, in miniature, in 2003, as a part of the American company, Texton Golf, Turf and Speciality Products.

Everything in the garden

Yet another innovation was the production of lawn mowers—making possible the modern style of garden, with grass the central feature, as opposed to the ‘cottage garden’ of fruit and vegetables off-set by flower borders. The lawn mower was invented in 1830, and Ransomes obtained the manufacturing licence for it two years later.

It is just a journey of 2.5 miles, or 4km, by road from Leiston to Sizewell. It is also the journey, however, from the country’s first production line to the latest nuclear power station—from the past to the future, with all its uncertainties and opportunities. If we take time to study and understand the past, maybe we will be better equipped to face that future.